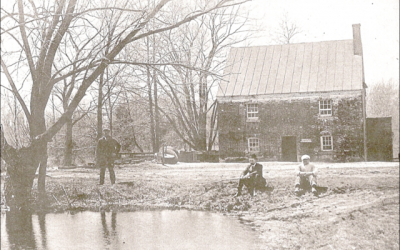 Until recently, Knotts Mill in Tuckahoe Neck rivaled Wye Mill as the oldest continually operated grist mill in Maryland.  Located just a half mile from the wharf at Sloop Landing on the Tuckahoe, it was perhaps better positioned to rush flour and corn meal to feed Washington’s army during the Revolution.

In June 1781, while Washington and Cornwallis were moving their armies toward Yorktown, American Colonel Henry Hollingsworth reported to Maryland Governor Thomas Lee that 600 bushels of State wheat were stored at Seth’s Mill (earlier name of Knott’s Mill).

Ruins of a mill dam survived on Fowling Creek Branch on Wiltshire Manor and have been identified as either a Blades Mill or Dickinsons Mill by Mrs. Clara Mitchell of Preston, October 17, 1967. This land at Grove near Preston had been owned by Henry Dickinson and several generations of Isaiah Blades heirs. Read more…