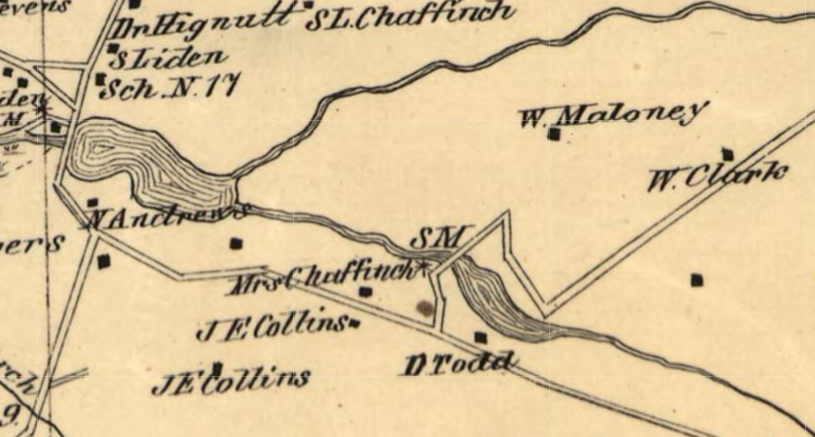 History and Location of Horsey’s Sawmill

The following text is extracted from John F. McGrain, The Molinography of Maryland, Expanded, 2007 Edition for Posting Online at the Maryland State Archives.

Per Mrs. Paul Knotts of Denton, there was an early mill on this site at Robins Creek. The up-and-down sawmill of Daniel Horsey was also at the head of the pond. See Stanton’s Mill of 1838.

Daniel Horsey once owned an up-and-down sawmill at the head of Robins Creek near Camp Todd, a long extinct works, possibly the successor to the Chaffinch sawmill found on the 1875 map by Isler. Location was probably at grid 14-K-10 in the ADC Atlas, based on a nameless asterisk found in Martenet’s 1885 State map.

Both the 1875 Isler map and the 1885 Martenet map showed Chaffinch Sawmill on the south bank of the south branch of Mill Creek, upstream of the mill near Potters Landing. The site was the north side of present Beauchamp Branch Road.

Horsey’s Sawmill in the Historic Landscape

In the map below, use the toggle at the upper left to turn on/off background layers for 1850-1900 maps of Caroline and surrounding counties.

See the larger map of Sawmills and Grist Mills in the Historic Landscape of Caroline County, Maryland with historical and imagery basemaps.