An open letter to the Editor, Times-Record

​I  would like to point out a couple of inaccurate ideas about Frederick Douglass’s birthplace which are presented in your article, Douglass Park opens on bicentennial, in the Times-Record, February 21.

You misquoted Douglass as having been born “in the town of ‘Tuckahoe’, which was located on the shore of Tuckahoe River but no longer exists.”  In fact, there never was a town by that name.  Tuckahoe was a rural place, the entire west bank of the Tuckahoe south of Queen Anne.  Douglass stated simply, “I was born in Tuckahoe, near Hillsborough”.

Your article also suggests that the location of Douglass’s birthplace is not precisely known.  In fact, you can stand within 30 yards of the exact site of the cabin where Douglass was born, and where he was raised by his grandmother, Betsy Bailey.​

Drive east on MD 303 from Cordova to the stop sign on Lewistown Rd. – a junction known as Tapper’s Corner.  Look toward the woods across the farm field.   The closest trees mark the head of a gully that was called “Kentucky Ravine” in Douglass’s day.  The cabin where he was born stood at the edge of the woods near the head of the gully.  Kentucky Ravine may have eroded several dozen yards deeper  into the farm field (toward Tapper’s Corner) in the past 200 years.  But its head is still very close to the birth site.

The site of Douglass’s birth was researched from Talbot County land records, Douglass’s autobiographies, and Lloyd family historical sources by Dickson J. Preston and published in his book, Young Frederick Douglass – The Maryland Years, in 1985.

Preston’s book was not widely known until my daughter, Amanda Barker Doran, and I first published his findings online with photos and maps  in 1996.  I have updated The Search for Frederick Douglass’s Birthplace website since then.  The web site has attracted hundreds of visitors and email notes from historians, students of African-American history, and tourists since we first published it.

Your readers can learn more about Frederick Douglass’s connections to Caroline and Talbot County at ChoptankRiverHeritage.org.  Search on “Douglass”.

Looks like Tuckahoe Park (since 2006) was simply renamed Frederick Douglass Park, and they made a new sign.  “X” shows the birthplace location.   – DB 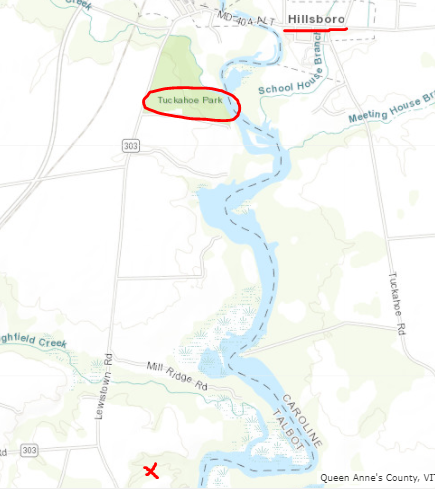