“It troubles me as it is so incorrect.”

We read the roadside marker and thought, “This doesn’t look right.  Let’s give Jo Ann a call.”

NECK OR TUCKAHOE NECK MEETING HOUSE WAS BUILT IN 1802 BY MEMBERS OF THE SOCIETY OF FRIENDS WHO HAD BEEN NICHOLITES, A SECT THAT ORIGINATED IN CAROLINE COUNTY.   THE BUILDING USED AS A HOUSE OF WORSHIP AND AS A FRIEND SCHOOL UNTIL 1897. THE THEN RENTED BY ‘DUNKARDS’ FOR RELIGIOUS MEETINGS FOR BLACK PERSONS AND AS A SCHOOL.  IT WAS SOLD PRIVATELY IN 1901 AND SINCE 1949 HAS BEEN OWNED BY CHOPTANK ELECTRIC COOPERATIVE INC.

Now let’s take a closer look at what the sign says … and what Jo Ann told us.

NECK OR TUCKAHOE NECK MEETING HOUSE WAS BUILT IN 1802

BY MEMBERS OF THE SOCIETY OF FRIENDS WHO HAD BEEN NICHOLITES, A SECT THAT ORIGINATED IN CAROLINE COUNTY.

THEN RENTED BY ‘DUNKARDS’ FOR RELIGIOUS MEETINGS FOR BLACK PERSONS AND AS A SCHOOL.

The “Dunkards” – the Church of the Brethren – established a church for black citizens at some point in time, and it was a public school one year, 1899 to 1900.

It also served as a barracks for Union Soldiers during the Civil War. It is said the soldiers would leave the building on Sunday so the Quakers could worship.

IT WAS SOLD PRIVATELY IN 1901 AND SINCE 1949 HAS BEEN OWNED BY CHOPTANK ELECTRIC COOPERATIVE INC.

In 1901, Edward Tylor purchased the building from the Third Haven Meetinghouse in Easton, and it was retained by his heirs until 1949, when it was purchased by the Choptank Electric Cooperative.  It stood unused except for one or two homecoming celebrations about 1929 and 1930. There has been no activity in the building since 1930.

Jo Ann added, “I am citing Dr. Kenneth Carroll’s works and the 1920 History of Caroline County.”

The Committee for the Preservation of the Tuckahoe Neck Quaker Meetinghouse is appealing to all citizens of the County to assist in this effort. We have developed a multi-facet plan of fundraising, consisting of writing grant proposals, electronic fundraising, and signature fundraising events.

Donate to save the Tuckahoe Neck Quaker Meetinghouse.

It takes just a minute.

Stand in the Place:  Where Quakers & Nicholites Stood

In 1974, Denton resident and land historian Eleanor Horsely prepared and submitted documention for the Tuckahoe Neck Meetinghouse to be listed in the Maryland Inventory of Historic Places.  She traced the history of the building, transfers of ownership, and physical condition of the building.  Read more.

The original single-story, one-room plan structure was erected in Federalsburg by the Nicolites around 1775-80. Although altered as a bungalow around 1913-15, the former Pine Grove Friends Meetinghouse, originally the Northwest Fork Nicolite Meetinghouse, is the only structure in Dorchester County to survive as a representation of these religious sects that were active within the Eastern Shore counties during the 18th and 19th  centuries. [Read more from the Maryland Inventory of Historic Properties.]

See all the Quaker Sites

Locate all Quaker sites with the web map here.

Explore Where You Are:  Quaker History in Caroline 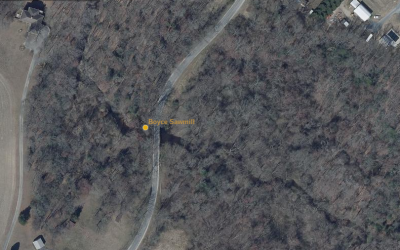 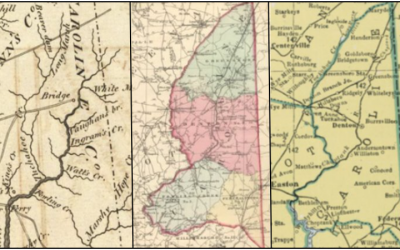 Historical Maps from the David Rumsey Collection Maryland's Eastern Shore and what later became Caroline County were first mapped by Augustine Hermann in 1670. Many of the maps which show the Eastern Shore since 1670 have been preserved and digitized by the David... 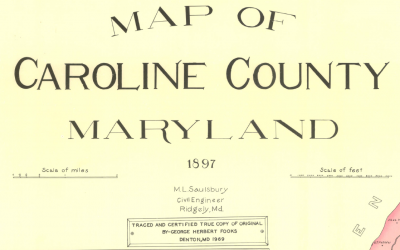 1897 is a Certified True Copy of the Original

We can see the Caroline County landscape in 1897, thanks to the efforts of two county citizens working 72 years apart. I found no reference to M. L. Saulsbury's mapmaking in the Denton Journal around 1897.  So I'm not sure why this map was made.  And I haven't seen an...