See the new St. Paul AME Story Map, Where the Dead Rise Up

I was scanning aerial photography of Caroline County and saw this striking image in the landscape – above-ground crypts in a church graveyard: 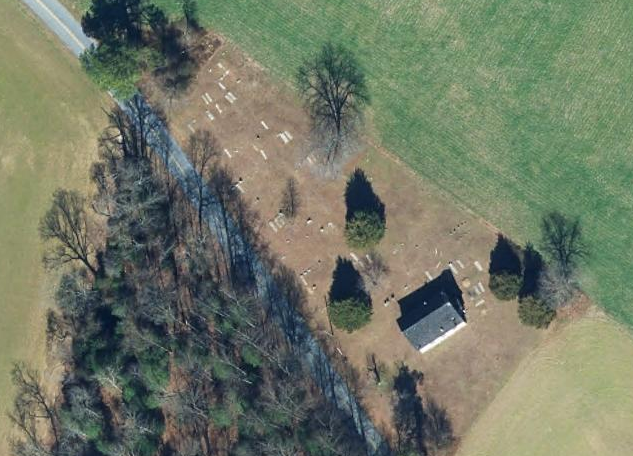 The 1897 map shows this was the site of St Paul African Methodist Episcopal (AME) Church:

I finally visited the site a few weeks ago.  The scene was incredible.  Pulpit, piano, pews, and stained glass were still in place.  I found hand-hewn sill timbers – evidence that the building was indeed built in the early 1800s, as noted by one source.

The roof is caving in.  One of the newer headstones in the graveyard was deliberately toppled off its pediment.   Within a generation, this old church building will die and disappear into the landscape like many others.  The gravestones will remain hidden under tangled vines for a thousand years. Then they will disappear, too.  The viewing is here: 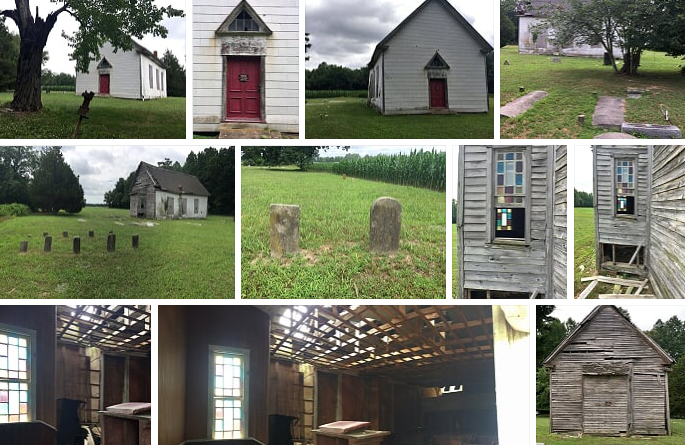 Stand in the Place.

Soon St. Paul AME church will be gone.  The obituary might read like this –  adapted from the non-profit St. Paul Church Historical Revitalization and Maintenance Inc.:

“St. Paul Church Historical Revitalization and Maintenance Inc. was formed in December 2000 to preserve church and maintain the grounds.  The church building is over 150 years old …

“St. Paul United Methodist Church represents a  disappearing part of Afro-Americans  history – religious freedom”  …   This church supplied need for local Afro -American to have their own place of worship.  Small churches like St. Paul are slowly disappearing.  We feel the strong need to save this one….
“The charter of the organization was simply to preserve St. Paul United Methodist Church and its burial grounds.   They were originally deeded to its AME founders on November 17, 1883, after the church building was purchased from the white  United Methodist Church located in nearby Concord, MD.  It’s believed the building was constructed in the early 1800’s.
“St. Paul United Methodist Church was a vibrant place of worship for local community through the 1960s. Memberships started to dwindle as family members passed on or moved from the area. Membership declined, the church was closed in the early 1980s, and the grounds were about to be abandoned.
“This led to the formation of St. Paul Church Historical Revitalization & Maintenance Inc.  The formation meeting was held at the home of  Melvin and Barbara Cook on December 16, 2000.  Attending the meeting were these founding members:
Rev. William and Audrey Briggs
Barbara Cook – First President
Maurice Stanford
William H. Briggs – First Treasurer
Sadie Johnson
Virgie Johnson
Odette Hawkins – First Secretary
Crawford Johnson”
I am in touch with members of St. Paul Church HRM, Inc.  Let me know if you want more info, have new info, or want to help:
info@choptankriverheritage.org
[crhcat_segregatedblackchurches]
[crhno_crh574]