The Death of 2LT Louise Hollister “Somewhere in the Pacific”

She was Maryland’s only Army Nurse casualty in WWII.

2LT Louise Hollister was too busy to think about home. She was glad for that. Nothing was worse than having nothing to do but think of home and the good times with family and friends.

On the day their unit landed at Suva, Fiji, 2LT Hollister and other army nurses rushed to set up surgical operations for the 142nd General Hospital. Conditions were primitive at first. They organized their operating room in a tent and sterilized instruments at the mess hall. They performed their first surgery that week. By the next week, 2LT Hollister was working 2-3 surgeries per hour as casualties were flown in from Guadalcanal and other battlefields.

“We still remember those days and how much joy we had in watching things grow into a hospital in buildings. Today we have a nice setup with the latest equipment.”

– 2LT Louise Hollister, Letter to the American Journal of Nursing, 1943

Nursing staff of the 142nd General Hospital at Fiji, 1943

Louise Hollister had only recently graduated from nursing school in Baltimore – Class of 1939 – when America started preparing for war. The Axis had invaded Poland and China, and the War Department asked the University of Maryland School of Nursing to help organize and staff the new U.S. Army Nurse Corps. The School called on its alumnae to help fill the ANC ranks; Louise Hollister was one of 27 who answered the first call to serve.

“Since I joined the ANC in February 1942, I have had many experiences long to be remembered. As we traveled across the USA it was a great thrill just to see my own country for the first time, despite its being but a “bird’s-eye view” from a train window. Then we sailed. As we crossed to this tropical island, we saw the beautiful country in all its native beauty-coconut groves, pineapple and sugar cane fields, native villages, and, of course, the natives. All along the way we received a welcome in their native tongue.”

– 2LT Louise Hollister, Letter to the American Journal of Nursing

After her operating room duty shifts, 2LT Hollister recalled her school days in Denton. She had read a lot in high school – Chinese poetry, the history of astronomy, the life of Galileo, and Richard Wright’s Native Son. She owned a copy of As I Remember Him, the autobiography of the son of German immigrants who graduated from Columbia University with degrees in medicine. Her reading expanded her world, and she left Hillsboro in 1936 for the Maryland School of Nursing in Baltimore. When she came back home on weekends to visit her family, it made the local news.

Now she was half way around the world, caring for American wounded from the Pacific Island battlefields. With the 142nd General Hospital more firmly established, she wrote home more often from “somewhere in the Pacific”. She asked her sister to donate her books to the county library’s Victory Book Campaign. The local paper reported that Louise Hollister’s volume of Chinese poetry was the first of its kind in the county library’s collection.

We have been kept very busy, for which I am glad. Nothing is worse than to have nothing to do but to think of home and ail of our good times. …

Moonlight nights are so beautiful here. You just can see for long distances, and you could read if it were necessary. The rains are terrific here, but they help our grass and flowers. We most hate to see them come. I can’t think of sufficient words to describe the sunset that we saw this evening. They change in color every minute, and with the palm trees in the foreground, it is beautiful. …

I have my room fixed so it looks a little like home … Well, the breeze just blew my light out so I’ll sign off for now.

While American troops were fighting the Japanese throughout the Pacific Islands, the Medical Corps was battling other raging enemies – tropical diseases that killed or disabled hundreds of soldiers. The worst were malaria and dengue fever. In August 1943, Levi Hollister and Helen Candy Hollister of Hillsboro received a telegram from the War Department informing them that their daughter, 2LT Louise Hollister, had died while serving in the Pacific Theater.

At the time of her death, the Hollisters could not know where or how she had died serving her country. The family learned only later that she died of a brain hemmorhage related to dengue. Her remains were returned to Hillsboro two years after the war, in 1947.

The Maryland School of Nursing and her classmates remembered Louise Hollister through the decades that followed the war.  The Maryland Nurse Alumnae Association established the Hollister Memorial Fund, and the chairman of the fund committee, Ethel M. Troy, attended graveside services for Louise Holland in Denton in October 1947.

A small group of the class of ’39 again enjoyed the annual Alumnae banquet and dance and celebrated its tenth year reunion. We remembered and relived the good times, laughed about the more difficult ones, and regretted that all the members of our class couldn’t be with us for the evening. … Louise Hollister was there in the hearts of every member of the class. Her place of honor will never be filled.

Today, the University of Maryland School of Nursing’s Military Service & Wartime Nursing virtual museum tour summarizes the work of the 142nd General Hospital with a special note about 2LT Hollister:

“In April 1940, following the outbreak of war in Europe, the U.S. Surgeon General asked the University of Maryland to help form a Medical Reserve Corps. Two years later, dozens of School of Nursing graduates were activated for duty with the 42nd and 142nd General Hospitals and went on to serve in Australia, the Philippines, Fuji, and Japan. Eventually, more than 150 graduates served in various branches of the armed forces, both at home and abroad. Louise Hollister, Class of 1939 and a member of the 142nd General Hospital, suffered a severe brain hemorrhage in August 1943, becoming the only School of Nursing casualty of the war.”

The sacrifice of 2LT Louise A. Hollister of Hillsboro, Caroline County, Maryland, is also memorialized in the WWII – Lost Lives exhibit at the Caroline County Historical Society’s Rural Life Museum.

Stand in the Place

The Life and Times of 2LT Louise Hollister 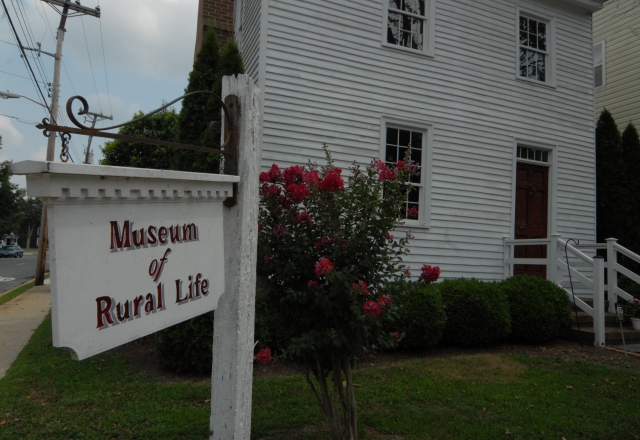 Museum of Rural Life in Denton

See the exhibit, “World War II – Lost Lives“, about the sacrifices of Caroline County’s women and men in military service, and their families.

The historic Caroline High School in Denton from which Louise Hollister graduated in 1936 was preserved and renovated beginning in 2013. It now serves Caroline Culinary Arts and Shore Gourment Market Cafe.

The History Behind the Story

Find research sources and excerpts for this story here.