The Sandy Island Bridge carries Maryland Route 287 over the Choptank River east of Goldsboro, Maryland.  The bridge built in 1919 was demolished and replaced in December 2013.  The 1919 bridge replaced an earlier bridge of unknown age.

The 1919 bridge consisted of four concrete arches, two measuring 48 feet in length and two 51 feet in length, which carried a 20 foot wide roadbed.   Luten Bridge Company of York, Pennsylvania, built the bridge from designs of the Maryland State Roads Commission. Two bronze plaques identified the builder and members of the  Commission. 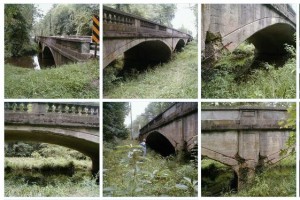 The Sandy Island Bridge was the only historic concrete bridge in Caroline County.    A bridge of the same design, built by the same contractor in 1910, still spans Marshyhope Creek in Federalsburg. These were two of only nine in the state road network, identified by the Maryland Historical Trust for the Maryland Department of Transportation in a jointly conducted survey which took place during 1980-81. 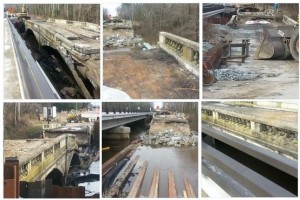 The Sandy Island Bridge was notable for its particularly attractive site – a gentle drop toward the river level, a low run through the forest and over the narrow upper reaches of the Choptank.   The replacement concrete beam bridge is higher above the river, and wider.