Socialist radicals on the Choptank

The Single-Tax Colony at Gilpin Point

The Georgists came to Caroline County when their political influence was in decline.  They had come close to dominating politics in New York City in the 1890s.  Many were jailed as radical communist agitators in neighboring Delaware before World War I.  But in Caroline County, the Georgists drew little attention from their neighbors when they bought land at Gilpin Point in the 1920s.  Today the Gilpin Point Georgists are all but forgotten. 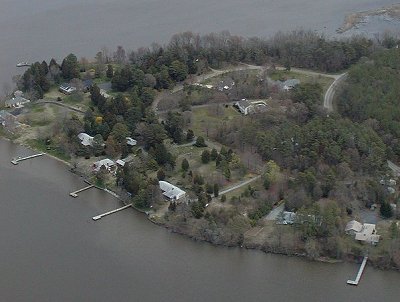 The Georgists met with violent political opposition in Delaware and elsewhere before and during World War I.  But they still established several economic and social communities where they could practice their single-tax philosophy on the local level.  Single-tax communities were founded, with varying degrees of success, at:

For a short period on the 1890s, single-tax advocates also controlled the town government of Hyattsville, Maryland.

The community at Free Acres, New Jersey, attracted artists and free-thinkers from the New York City area. Arden, Delaware, became an arts and crafts community inhabited by sculptors, painters, blacksmiths, and communists. Both these communities and the one at Fairhope, Alabama, survive today. 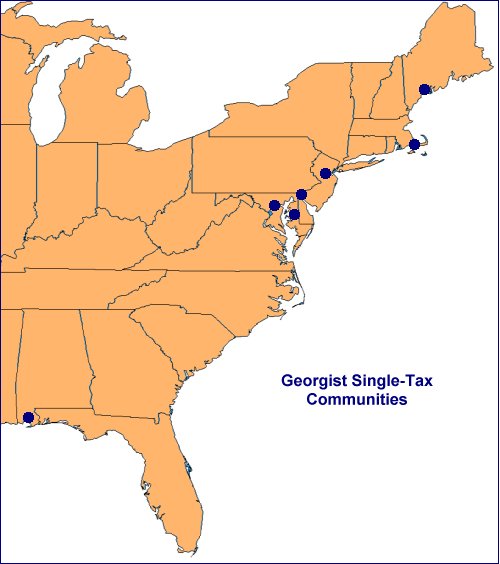 Frank Boland, one of the Georgist associates at Arden, Delaware, laid the foundation for a single-tax colony at Gilpin Point.

In 1911, Boland purchased 108 acres at Gilpin Point from Andrew Towers for $3300. Boland probably did not reside regularly at Gilpin Point until after 1917. Boland put the land at Gilpin Point into a public trusteeship closely based on the Arden single-tax model, with 99-year leases to be deeded to residents. The date of the colony’s deed of trust was 25 February 1927. The first leases to individuals were transacted in May of that year.

Unlike Georgist activity across the state line in Delaware, where Georgists were jailed as communist agitators during World War I, Frank Boland quietly established his single-tax colony on the Choptank River without political fanfare. It appears that few county residents were even aware of Boland’s political and economic leanings. They knew him only as a friendly eccentric who dressed up for trips to Denton in Windsor tie, Oxford jacket, and knickers. Some suspected that his “colony” might be a scheme to avoid paying county property taxes. Local residents reported that he would talk single-tax philosophy with anyone who would listen, but he did not agitate for radical political, social, or economic change in Caroline County.

During the 1920s, a few other single-tax advocates bought lots and associated themselves with Boland. By the end of 1927, there were twelve persons who together leased eighteen of the parcels at Gilpin Point. The combined holdings of the enclave amounted to nearly six leased acres, and the combined annual single-tax assessment for the twelve lessees was $210.88. Yet there were never any outward signs of a commune or tax colony.

Who were the Gilpin Point Georgists?

Frank Boland and most of his associates who leased parcels at Gilpin Point were also residents of the single-tax artist colony at Arden, Delaware. These included:

Others who leased lots at Gilpin Point but had no known association with Arden, Delaware, were:

It’s uncertain what degree of interest and commitment to the Georgist single-tax ideals was shared by these other lessees:

An encyclopedia of utopian-economic communites described Gilpin Point’s optimistic start and ambitious plans this way in 1930:

“There are five dwellings in the enclave, one having been constructed in 1930. Little work has been done yet in a public way, other than surveying and plotting. The land has perfect drainage and is adapted to the most successful use of the septic tank. A driven pump-point will bring excellent water anywhere at trifling expense. The road plan includes avenues, roads and lanes with a width of 40, 25 and 10 feet, respectively. A county road, over which daily mail is delivered, runs through the enclave. The fiscal year ends December 31. Leases have been granted to 18 persons [actually, there were 10 persons leasing 18 lots], whose combined holdings amount to nearly ten acres. The rates for rent per quarter are $12 a year on the shore line, and $6 elsewhere. The Trustees are George Frank Stephens, Frank Boland and William Worthington, Jr. Frank Boland is Superintendent. No poor relief has been granted by the public authorities to residents of this enclave.”

The economic experiment that began in 1927 ended a decade later. The colony’s spirit of economic dissent seems to have died with Frank Stephens. His position on the board of trustees was never filled. The colony reverted to private ownership in 1938 when the Gilpin Point lots were bought by Herbert Mason, whose family apparently continued to visit Gilpin Point.

Frank and Annette Boland continued to live at Gilpin Point, where Boland was observed by neighbors to maintain his vigor in the last years of his life by exercising with an outdoor gymnasium that he designed and built himself. Boland probably died before World War II. His Swiss chalet-style house was torn down in 1957 to make way for a more modern residence.

No evidence of the single-tax colony remains at Gilpin Point today.

[The source for much of the information presented here about the Georgists at Gilpin Point is a photocopy held in the archives of Caroline County Public Library of a term paper written by Scott Pedman, 19 November 1992, for the “Topics in American Intellectual History” course (HIS 508-10) at Washington College, Chestertown, Maryland.]