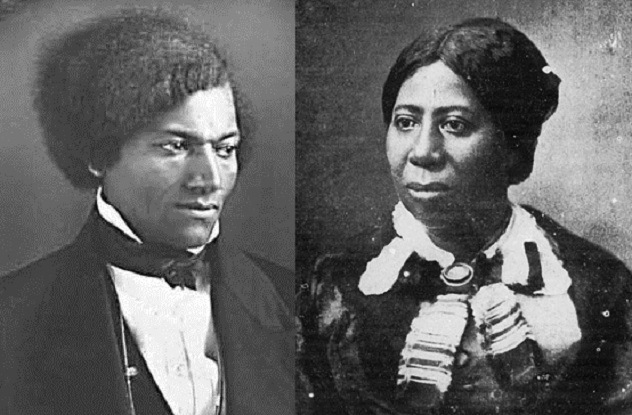 Rosetta Douglass Sprague wrote in the memoir about her mother, Anna Murray Douglass, that young Frederick Bailey “gave his heart” to Anna Murray, and she “sympathized with him and she devoted all her energies to assist him” to escape slavery in Baltimore.

Because she was the girl from down home in Tuckahoe Neck.

Sprague wrote that her mother was born in Denton, Caroline County, Maryland.  But Denton was probably just a convenient reference point for her Washington DC audience in the 1890s.  Anna Murray was more likely born and raised in Tuckahoe Neck near the free black settlement of Deep Branch.

Later in life, Douglass recalled the same places that Anna Murray knew along the banks of the Tuckahoe – Muddy Shore, Kentucky Ravine, Hillsboro.  He told a Baltimore audience in 1877, “I am an Eastern Shoreman, with all that name implies. Eastern Shore corn and Eastern Shore pork gave me my muscle. I love Maryland and the Eastern Shore!”

And he loved the girl from Tuckahoe Neck, down on the Eastern Shore.

The Murrays and Waymans of Tuckahoe Neck

The voluminous memoirs of  Bishop Alexander W. Wayman help make the connection between Tuckahoe Neck and Anna Murray.  Wayman was one of the first bishops of the A.M.E. Church.  He was born a free black across the Tuckahoe from where Douglass was born.

Wayman’s neighbors were the Murrays.  In his Cyclopedia, Wayman named several Murray men who left Caroline County in the 1840s and later to become prominent church leaders in Baltimore, Philadelphia, and New York.

In his Recollections, Wayman recounted that Anna Murray “kept house” for his mother while she attended a religious camp meeting in 1824 or 1825.  Wayman also described in detail a later incident in which Anna’s father, Bamberry Murray, was questioned about a runaway slave.

These close encounters between the Murrays and the Waymans of Tuckahoe Neck make it seem less likely that Anna Murray was born and raised in Denton –  7 miles away by country road on foot or horseback.