Satellite imagery and 1875 map of Caroline County, Md., were used to locate the site of an African-American church near an upper crossing of the Choptank River.

I recently digitized a paper copy of the map of Caroline County, Maryland, which was drawn by John B. Isler in 1875.  While geo-rectifying sections of the map (stretching and warping the images to match the “ground truth”), I noticed a building marked “Col Ch” on the road east from Goldsboro, at the crossing of a branch of the upper Choptank River.

The 1875 Isler map shows the road making a dog-leg to the south before passing the church and crossing the river.  The road led to a shallow ford – a natural crossing without a bridge.  The only nearby bridge was the Sandy Island Bridge over the main branch to the east.

To try and locate the site of this 1875 African-American church building, I laid the 1875 map section over satellite imagery in a web map here.  The old map doesn’t align perfectly with existing roads, because of inaccuracies in the mapmaker’s drawing.  But it’s still possible to match the 1875 road east from Goldsboro to modern MD Route 287, as it runs to the Delaware state line.

The modern state highway runs nearly straight from Goldsboro into Delaware.  But until the 1940s, the road sections still followed historic tracks.  The road segments were maintained by the county, which appointed road supervisors to decide which sections to pave with oyster shell.

A close look at modern satellite imagery shows where the 1875 road bed may have turned down to the river before heading east.  The stream bed is  marked by woods growing from stream margins that are too wet for agriculture.

Imagery shows a farm track west of the river, which may follow the original road bed that led past the church site to the river crossing.

East of the church, the historic road probably crossed the modern farm field along the soil marking indicated by the arrows.  This line is also visible in the trees east of the river. 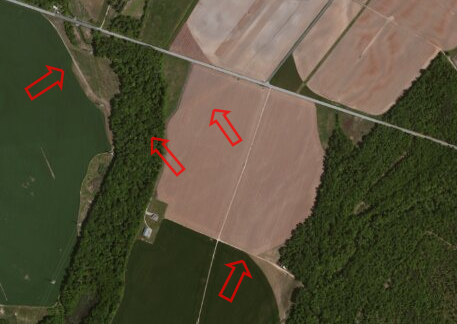 It’s possible that the 1875 road followed the route of the modern farm lane marked by the arrow at the bottom of the image.   But the 1875 map shows an approach from the west, rather than southwest, to Sandy Island Bridge, which is located near the right margin of this image.  So this track seems less likely.

Is this close?  Let me know what you think.